The recent Facebook scandal and breach of trust involving Cambridge Analytica seems to have disrupted the status quo in Silicon Valley. Even before this, we’ve been seeing more Big Tech execs hauled before the media and even Congress/Parliament to answer questions about the security and commercial uses of consumer data. Mark Zuckerberg appeared on CNN for a penitential interview (watch here) and his day before Congress is looming. Facebook’s failures will have repercussions and implications that go far beyond Silicon Valley – and our clients want to know what’s going on. 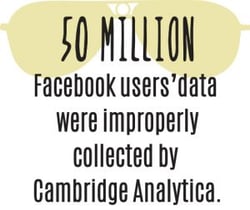 The scandal itself is a long and complex tale of how advertisers and digital marketers collect and use data for their own purposes – and how data collection drives mass marketing, both commercial and political. But as always, my thoughts are drawn to the client industries we work with, all of which depend on secure data collection and sharing for many legitimate purposes – including travel, loyalty, retail, mobile commerce and financial services, to name a few.

Fracturing the Bond of Trust for Data Sharing

As the Cambridge Analytica fallout continues to haunt Facebook, what are our clients thinking about? Yes, it’s a story about Big Tech companies and the outsized influence they have over seemingly everything – but it’s also about the loss of trust among consumers that leads to less data sharing, loyalty and revenue for all.

The Fallout for Loyalty Marketers

Perhaps more than anyone, loyalty marketers will be the ones to “pay” for the erosion of trust caused by Facebook. What can loyalty marketers do to shore up how consumers will feel – and react – when asked to share their personal information? Data collection is the number one reason why retailers and other brands invest in loyalty programs – every transaction is tracked so it can be rewarded, leading to future purchases. While this has been a popular trade-off for consumers, will they be less willing to make that trade-off if they lose trust in Facebook and other companies in general?

ThinkInk works with a number of loyalty marketing companies that are scrupulously transparent about what data they collect – just as importantly, they offer their loyalty members something in return for their data. This is the best way forward across all industries – using customer data only for its intended use and being completely transparent about data collection practices. Instead, Cambridge Analytica trawled Facebook “likes” for any clues about sensitive personal information like sexual orientation, race, gender, even intelligence and childhood trauma, according to The Guardian.

For loyalty marketers, the big takeaway is that there’s a difference in the minds of consumers between sharing transactional and behavioral data that is collected and used in context – grocery rewards cards, for example – versus sharing personal “about me” data that doesn’t seem relevant in a commercial context. If you played Farmville on Facebook four years ago, that data shouldn’t now be used as part of a targeted political campaign. The transactional nature of collecting loyalty data is precisely what makes it palatable, provided that brands are absolutely transparent and above-board about data collection practices.

So far, Facebook CEO Mark Zuckerberg has said the right things – “We have a responsibility to protect your data, and if we can’t then we don’t deserve to serve you.” But what does that actually mean? How can loyalty marketers – and others in our client industries – remedy their customers’ loss of trust while creating a safer environment for data sharing and loyalty? Let’s not forget that this isn’t Facebook’s first offense – a single PR scandal won’t ruin a brand, but it can reveal problems that haven been building up over time.

The question of privacy and data protection is now part of a much larger conversation about consumer protection and personal safety in a digital world. The new EU General Data Protection Regulation (GDPR) – which goes into effect in May 2018 – is being described as the most important change in data privacy regulation in 20 years. Rather than look at Facebook’s failures from the outside, now is the time for brands and loyalty marketers to put their own data practices in order – believe me, your customers will reward you for it.